The Orange Challenge against violence against women

Take part in the Orange Challenge!

Why 8.37 kilometers? We are joining Hindolo Pokawa and 50 other men on their walk of 837 kilometers through the interior of Sierra Leone. Their journey begins on November 1 and will take them from Gendema to Freetown, where they hope to arrive on December 10.

Hindolo started his mission against violence against women and girls after the brutal rape and murder of a 5-year-old girl. Hindolo believes that the only way to effectively combat violence against women and girls is to change the social and cultural norms of men and boys, and has dedicated his life to this end. On his journey, he visits several villages, where he engages with traditional and religious leaders, schoolboys and any other men and boys he can find, so that they too become allies against violence.

Violence against women in Sierra Leone

It is estimated that up to 257,000 women were victims of gender-based violence during the civil war in Sierra Leone between 1999 and 2002. The systematic use of violence against women still occurs to this day, as between 8,000 and 10,000 women become victims every year. They are in urgent need of assistance. UN Women has established ‘One Stop Centres’ where women can go for medical, psychological and legal help, but these centers cannot help all victims, for lack of funds. By participating or donating to the Orange Challenge, you can make a difference for women in Sierra Leone.

With €100 we can help one survivor of violence, for example with shelter, livelihood, transportation to court and medical or psychological assistance.

Will you join us?

Register as an individual or as a team here and send an email to actie@unwomen.nl with your postal address. We will send you a toolkit with more information about the challenge and tips and sample texts to raise money. And, when you have received the first 25 euros, we will send you an Orange the World t-shirt! 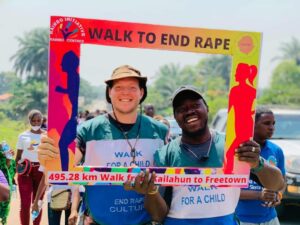